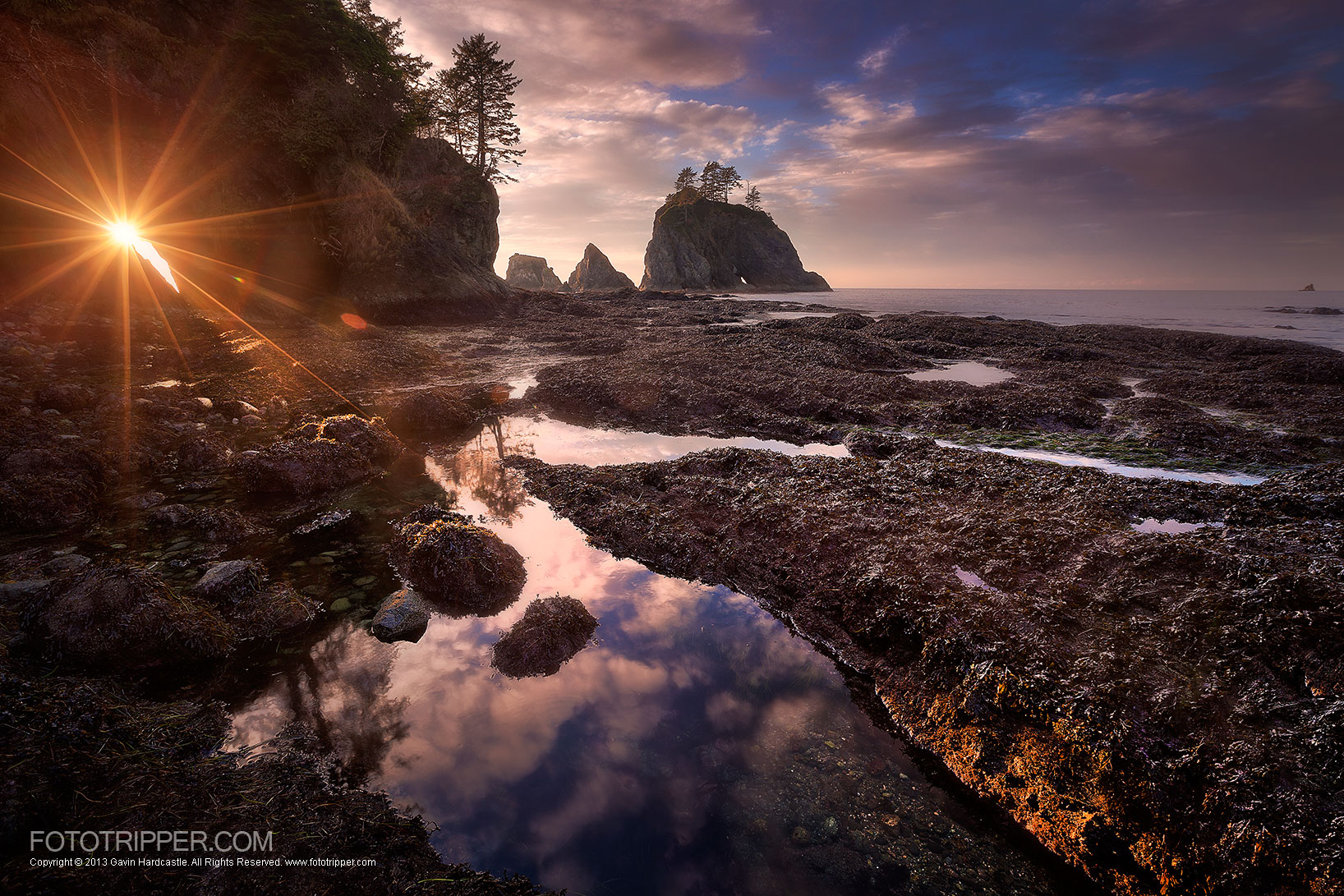 Shi Shi Beach is on the North Western tip of Olympic National Park in Washington, USA. It’s a truly spectacular location for photographers due to the dramatic sea stacks which litter both ends of the beach.

It has an ‘otherworldly’ atmosphere that few places have and should absolutely be on your photography bucket list. Here are my Shi Shi Beach Photo Tips. 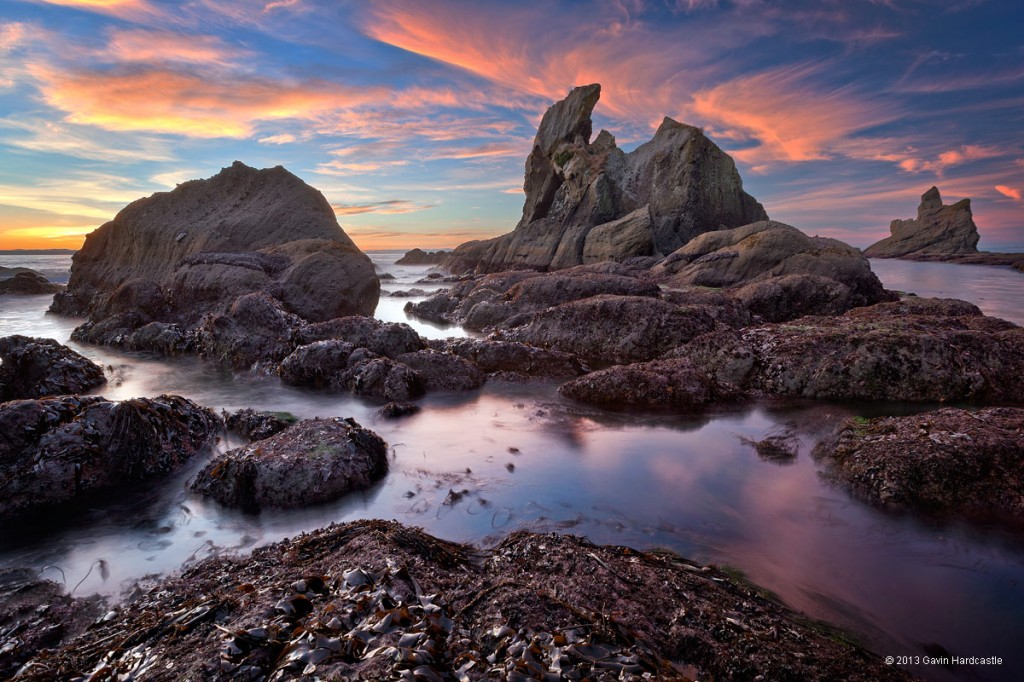 From here you’ll be able to see the amazing scenery at the other end of the beach towards the south and it takes about another hour to hike over to those immense sea stacks. Be sure to get there early enough to figure out your composition ideas as you’ll literally be spoiled for choice when the light starts to get interesting. Here’s a Bing map that shows both sections of the beach.

It’s actually pretty easy to get to Shi Shi Beach although it feels like you’re at the end of the word, which you pretty much are I guess. From Port Angeles take the 101 West until you see a sign for 112. Take the right turn on to 112 and stay on it until you hit Neah Bay. You’ll pass through Clallum Bay and Sekiu before you reach Neah Bay.

Once you arrive at Neah Bay stop off at the Makha Indian Reserve Welcome Centre to pick up your park pass, it’s about $15 and worth every penny.Â  Next follow the signs for ‘Hobuck Beach Resort’, drive passed it and you’ll be at the trail head in around 15 minutes.

There’s a small official car park (space for several cars) on the right just after the last few houses on the reserve. You’ll notice signs from some of the residents offering secure parking. We didn’t take up that offer because we were not camping overnight but I’ve read some other online reports from people who were happy they’d opted for the supervised parking because they camped on the beach for a few nights.

This is where it gets interesting. If you go at a decent clip it’ll take you around an hour in daylight to get from the trail head to the trail end. The first half is well maintained forest trails. The second half is a very boggy logging road so be sure to wear sensible footwear. There are lots of mini trails at the side of the logging road which help to avoid the worst of the bogginess but be careful in the dark, it’s easy to loose the main trail.

At the end of the trail there’s a fairly steep climb down a rough and rooty slope to the beach. Calm your excitement and take it easy, it’s not worth breaking a leg.

When you emerge from the trail on to the beach you’ll notice that you’re fairly close to the sea stacks on your right, go visit these first and begin your mind blowing visit to Shi Shi beach.

We stayed at the Hobuck Beach Resort which is the closest possible location for any kind of lodging. We used one of their small cabins which was decent for the price. The cabin was clean and everything worked. My only gripe was the speed of the WiFi which was very slow. I would imagine it gets booked up pretty quick in the spring and summer months so book early unless you plan to camp.

As mentioned we did not camp on this trip but while on the beach we noticed some really choice spots to set up camp. I didn’t see any bear proof food stores or toilets so I expect it’s pretty much up to you to make sure you know how to camp in the wild. 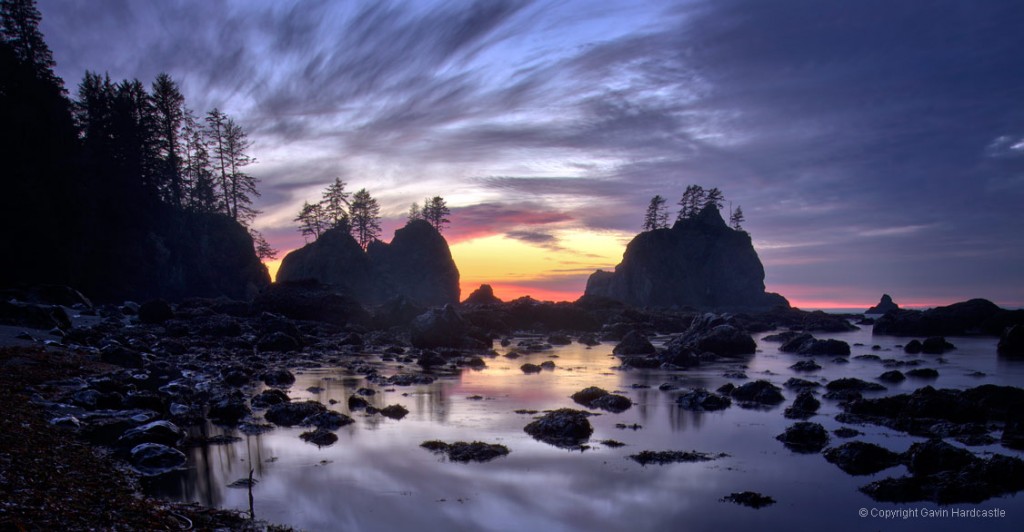 At the trail head I was surprised to see a ‘No Dogs Allowed’ sign but we did see a couple of people with dogs on the beach so it seems that rule is ignored. I met a camper who said that in the summer there are hundreds of people on the beach so I guess that might be why dogs are discouraged?

Be sure to visit Cape Flattery while you’re in the area. It’s another stunning location and very easy to reach. Check out my Cape Flattery Photo Tips.