Florencia Bay sits on the edge of Ucluelet on the West Coast of Vancouver Island. It’s close to where Ucluelet ends and Tofino begins. Here are my Florencia Bay Photo Tips.

The hidden gem seen in the picture above is overlooked by most tourists but is easy to find. I’ve no idea what the official name of this section of beach is but here’s how to find it.

When you reach Florencia Bay you have to walk down a wooden staircase to reach the sand. As soon as you reach the sand turn right and walk along the beach as far as you can until it ends with a spit of land. Quite close to the water you’ll see a couple of rough trails that lead into the bush. Take any of these trails and follow them until you come out the other side of the spit and see those beautiful emerald green waters from the Pacific Ocean.

Alternatively you could hike around the waters edge but it’s really slippery and probably not a good idea.

You could also kayak directly from Florencia Bay to this secluded beach pretty quickly and you’d get to glide through those gorgeous emerald waters.

This is a shot of Florencia Bay as you walk along the beach towards the spit at the end.

Hiking time from the car park to the green waters is about 40 minutes. Florencia Bay is really long and the bush wacking will take around 10 minutes unless you bring a machete.

If you’re feeling adventurous you’ll find some similar spots further along the craggy coastline if you don’t mind more bush wacking. Eventually you could make it all the way to South Beach near the Kwisitis Visitor Centre.

From the Pacific Rim Highway 4 take a right towards Tofino instead of turning left for Ucluelet. You’ll see the sign for Florencia Bay in about 5 minutes. Take a left onto Wick Rd and then a second left to the car park at Florencia Bay.

From here it’s a short walk to the steps that take you down to the beach.

Ucluelet and Tofino have a glut of high quality accommodation from BnB’s to Hotels to cabins. Our favourite place to stay is the Black Rock Ocean Resort. It’s a little pricey because of the spectacular location. You can get some pretty good photos just from the balcony in your room. 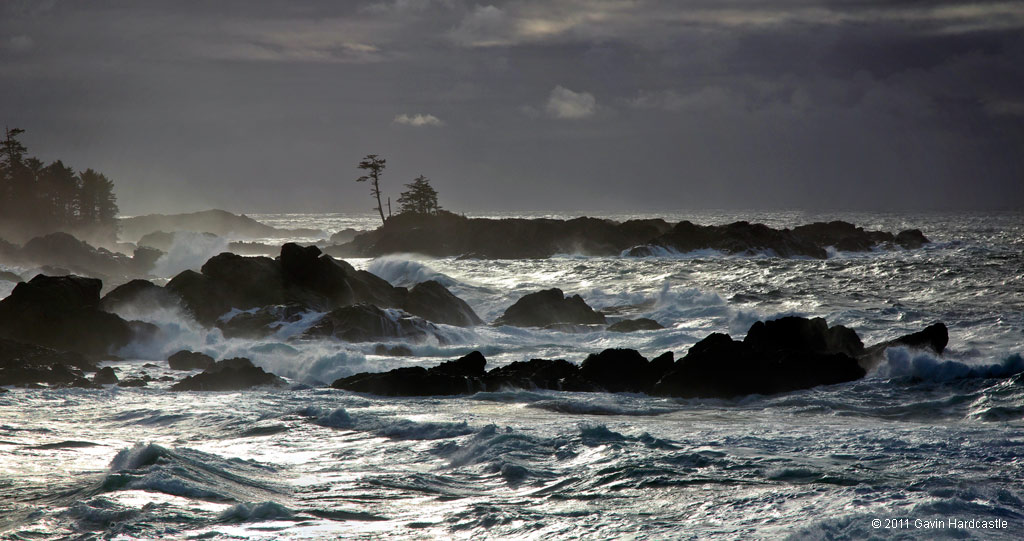 I tried one of the yurts at Wya Point Resort which is next to the Wya Point campground and it was pretty deluxe. The campsite and the yurts are right on the edge of a nice beach.

With Ucluelet being such a small town your dining options are pretty limited. If you want fine dining don’t mind paying big city prices try ‘Norwood’s’ on Peninsula Rd or ‘Fetch’ inside the Black Rock Ocean Resort. There are cheaper places to eat like ‘Romans’ but I’ve found them to be inconsistent. We tend to either splash out on the good stuff or cook our own meals. If you have any recommendations please leave a comment below.

Be aware that you are sharing the environment with predators. Use common sense and don’t create a situation that would put yourself or an animals life in danger. It’s normal to cross paths with bears on the West coast so give them plenty of space and avoid creating a temptation for them. If you’re carrying a whole smoked salmon in your backpack don’t be surprised if a bear starts eying you up.

What’s your favourite place in Ucluelet and Tofino? Where should I photograph next?